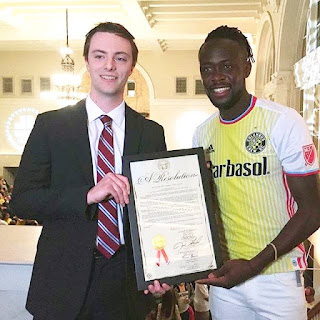 Kei Kamara has been honoured by the Ohio state senate for receiving the 2015 MLS humanitarian of the year award,which was presented by Advocare, making him the  first player in Black & Gold history to earn the prestigious League honour.

Kei like many others is known for his exceptional charity work towards the development of his home nation.
In September of 2015 the Columbus crew star forward and fellow footballer Michael Lahoud opened doors to their 'Education For All' primary school in Sierra Leone, along various other charity projects in the country.