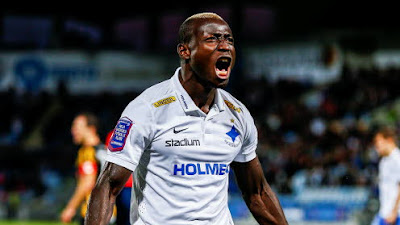 Ten Weeks ago Sierra Leonean striker, Alhaji Adriano Kamara’s career was feared over,  after his season ended due to heart problems.


Kamara who played for Swedish football team,Norrkoping, underwent several heart tests in the united states and has been given proper medical testing and approvals from two top cardiology specialists , declaring him fit to play again.

In addition to the good news, the Sierra Leonean striker has joined United States Major League Soccer (MLS) club DC United on three-year deal.
A transfer fee has not been paid for Kamara but Norrköping will be compensated if the player meets performance incentives or sold in the future.

He was originally examined as part of a Uefa requirement because IFK Norrkoping are due to take part in the qualifiers for next season’s Champions League.
Experts from both Uefa and Fifa had advised Kamara against continuing playing football.
This forced Norrkoping to remove Kamara from their 2016 season squad to stop him from playing more matches.

But further examinations carried out by Cardiologists in the United States have now revealed that Kamara has no cardiac issue.

Kamara will undergo testing at the end of each season, but for now “is so happy and excited to be able to play again,” Kamara’s local agent Chernor Musa Jalloh told BBC Sport.
The former Kallon FC marksman is the third Sierra Leonean to join DC United after Abdul Thompson Conteh and Ibrahim Koroma who didn’t play a single match for the MLS club.