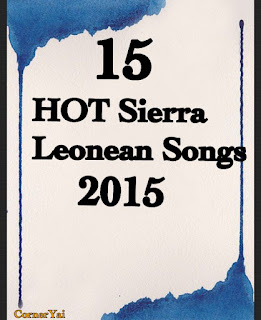 This year was a good year for music in Sierra Leone. The latter part of 2015 everyone was dropping music.
Among those songs released in the last 12 months here are 15 HOT Sierra Leonean songs that entertained in 2015 that you should be listening to.

1.Morris- 'BOOGIE DOWN'
We are still shaking it down to this song for sure, morris' old school beat to boogie down took us all way back. Definitely one of the best songs this year.

2.Nasser Ayoub: Survivor
Nasser's 'Survivor' song help stop the stigma that followed ebola survivors, allowing many to see that they are humans just like them.  Nasser was one of the celebs who was very active and hands on with promoting prevention of ebola in addition to his daily news update of the situation on ground.


Yung Sal dropped Kam join we six months ago,  followed by a crisp video.
Since then he has gone on to become 1 of the most sort after rappers.

4.Cece- 'JIHUN'
She is taking everyone by storm with her soulful voice and afrocentric style.

5.Abizzy – 'SUGAR'
2015 was a good year for Abizzy and he will continue to reign with good sweet like sugar music.

6. Emmerson-'TELESCOPE'
We heard a new sound from Emmerson and if you are complaining about it then look through the telescope because you don't know good music  even if you saw it coming your way.


Famous was  unstoppable this year with solid hit after hit and he wont stop for 2016.

8.Rahim ft Alonzo- 'TEKNEH'
These two surprise us with a catchy tune that will be a big hit on the dance floor and radios

10.Suga Lulu-'TAKE OVER ME'
Lulu returns with new promising tune and management.


Innocent showed us his emotional side this year and we hope to see more.

12. Double Bangz- 'CIRCULATE'
The boys were on their A game this year , they eve featured music veteran Awilo on the remix of circulate.