"Good looks can only take you so far . We are all ‘Queens’ , Not sub queens". 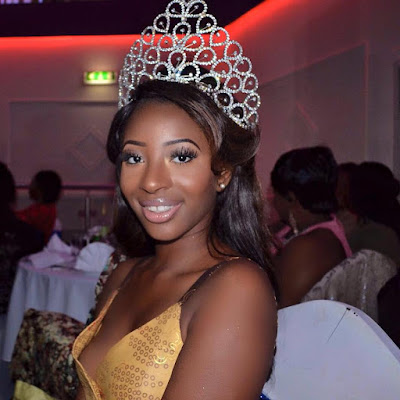 Sierra Leone Pageant fans and supporters were left to choose a side last Saturday, when Margaret Murray, the reigning Miss Sierra Leone 2014 placed claim on the title of reigning supreme .

Two days after her public statement, referring to winners of the Miss Sierra Leone Pageant in the diaspora as 'sub queens',  Yazmin Karim, Miss Sierra Leone UK 2015,  had some choice words of advice, which also served as a response to Murray's diss.

In a caption to the above ( header) photo , Yazmin mentions the importance of
"speaking ,behaving and thinking"  in the right manner in contribution to the future you.

She also made reference to “ your nature, your characteristics, your quirks and your personality, not your face,”  being what makes you the special person you are, adding that “Good looks can only take you so far. We are all ‪#‎Queens, not 'Sub queens' ‪#‎beautywithapurpose".

any of Murray’s fans supported her status over the weekend ,including former Miss West Africa International 2013, Hawa Kamara  who wrote (translated)“But they know. D "TITLE" you are the  holder , Madam na u hold am. You are holder of the captain band, and you hold the trophy. You are MISS SIERRA LEONE 2014.


The same feelings were not shared by other pageant supporters who were' disappointed" by her actions, considering them to be  less of a “queen”.
‘Very dissappointed Margaret Murray..” wrote an organiser of Miss SL Uk

“ It seems like Margaret Murray hasn't quite grasped the quality of GRACE. This statement is the complete opposite of what it means to be a GRACEFUL Queen. Some people want their star to be the only one that shines but it's not possible.” said another commenter .

If you need a refresher on Margaret's status here's what she said: 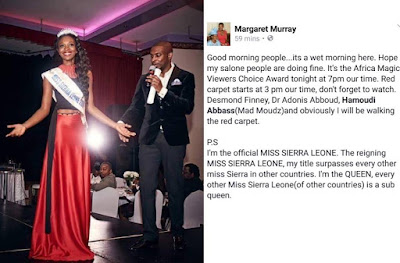 As her fans continue to endorse her with supportive messages, others await an explanation from Miss Murray herself. Her reps and The Miss Sierra Leone Pageant limited are yet to respond, stating the reason behind  Margaret's sudden outburst claim.