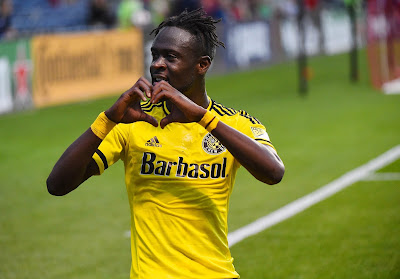 Sierra Leone International star forward Footballer ,Kei Kamara has extended his contract through to 2018, as a designated player  with  Columbus crew SC.

He is the second designated player on the roster list in the current Columbus Crew squad after Federico Higuain.

"I feel really great to sign a contract with Columbus, this is the team when I first started playing my professional career," he told BBC Sport. For them to trust me this much and give me a longer contract and as a designated player this is a true blessing for me.

"This is a great success story of a player that has risen through the MLS ranks, and that rise culminated with one of the best seasons in MLS ever. To me, this is well-deserved.
We are proud to be able to offer Kei a contract extension”

While the terms of this deal were not disclosed, Kei’s  previous contract ran until 2017. However, he had been locked in a contract dispute as he sought a new deal following a stellar season in which he scored 22 goals, the joint highest in MLS, and helped Crew SC to an Eastern Conference championship.
Amongst his many awards in 2015 were MLS player of the week titles